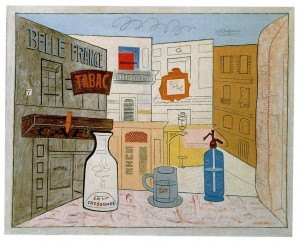 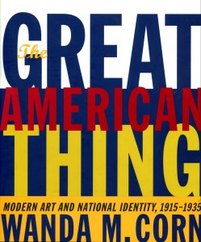 A few days ago I bought your book The great American thing because I was intrigued by some of the illustrations, particularly those depicting syphon bottles by Léger (p.128) and Stuart Davis (p.338 and 348). I am […] currently writing a book on the representation of soft drinks in the arts. Of course I knew the Léger painting but I must admit I had never even heard of Stuart Davis.

I don’t want to be priggish but in your text on Stuart Davis I discovered some small mistakes. On page 348 you write that his 1928 painting Rue Lippe is showing a milk bottle, a mug of beer in the shape of a hat and a syphon bottle. Well the milk bottle with the inscription La Cressonee is in fact a water carafe, used in French cafés to dilute strong spirits like absinth and pastis. La Cressonee is a French brand name for absinth as well as pastis. The glass beer jug is not in the form of a hat. Bière Hatt is the brand name of a beer from the Hatt Brewery in Kronenbourg (Alsace), the present-day Kronenbourg Brewery which is a subsidiary of the Danone food company. I suppose the mug is standing on a beer mat and as Davis painted both mug and mat in the same grey color they indeed look a bit like a top hat with a handle.

I ought to let you know this in case your book will be reprinted someday in paperback or other form.

Thanks so much for the correction on the water carafe; not at all priggish, but helpful. I should have caught that as I see that my source, Stuart Davis : an American in Paris, a little catalogue by Lewis Kachur, had it right. I understood that Hatt was a brand name but also that Davis was having a bit of Cubist fun in making the mug and coaster into the shape of a hat – playing with Hatt/hat. I guess I didn’t make that as clear as I should have.

I do appreciate your being in touch with me about the Rue Lippe painting. Good luck on your project.