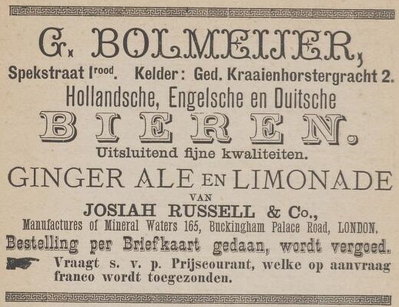 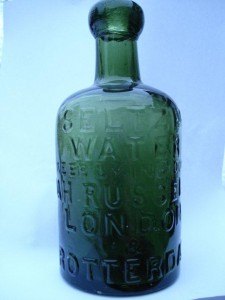 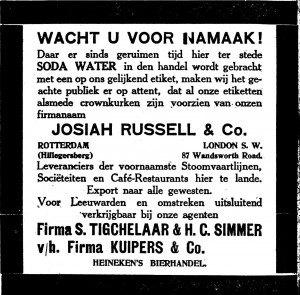 In November 1886 Josiah Russell (Bexhill, October 10, 1844 – Bexhill, August 5, 1911), owner of an artificial mineral water and soft drinks factory at 165 Buckingham Palace Road, London, became a temporary resident of Rotterdam, renting rooms in the house of stage director Antoine Jean Le Gras (1838-1899). Josiah Russell must have had some knowledge of the Dutch soft drinks market as several products of his company (ginger ale, ginger beer, soda water and artificial mineral waters) were already being distributed in the Netherlands. An 1881 advertisement for these products by an Amsterdam broker named James Robert Thomson (1838-1896) does not mention in what kind of bottles (glass or stoneware) these products were sold.[1] Nor do we know if Thomson sold these products only to pubs and catering establishments in Amsterdam or if he had access to a wider distribution network. Business relations between Josiah Russell and James Robert Thompson were anyway about to be terminated. Russells temporary residency in Rotterdam was clearly meant to set up a Dutch factory.[2] This undoubtedly was a wise thing to do. It is hard to see how imported soft drinks could continue to be sold to Dutch consumers at competitive prices at a time when Dutch soft drink factories were shooting up like mushrooms.

The Josiah Russell factory in Rotterdam was located on the Delftschepoortplein 7-8 in the old city centre.[3] Right from the start in 1887 Josiah Russell set up agencies in other parts of the country. In nearby Delft the soft drinks and artificial mineral waters of Josiah Russell were distributed by Fa. J. Zielstra & Co., in Haarlem by Gerrit Bolmeijer and in Middelburg, in the province of Zeeland, a man named Johan Lambertus ten Raa was appointed as a distributor, according to an 1888 advertisement.[4] There must have been agents in other towns as well. Josiah Russell deregistered as a resident of Rotterdam in October 1888, leaving the management of his Dutch plant to a reliable assistant or supervisor and probably returning to Rotterdam once in a while to check up on things.[5] 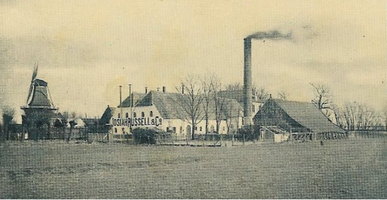 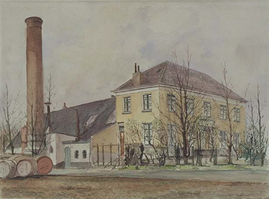 In July 1895 James Henry Marsh (1875-1956), son of Josiah Russells business partner Edward Marsh (1834-1924), came to live in Rotterdam and assumed daily management over the Rotterdam plant. Between his arrival in Rotterdam and his marriage in Fulham (London) in September 1909[6], James Marsh rented rooms on at least ten different addresses in Rotterdam. From September 1895 till July 1897 he lived in the house of Antoine Le Gras, just like Josiah Russell had done in the previous decade. It seems very likely that the arrival of James Marsh in Rotterdam had something to do with the relocation of the soft drink factory from the old city centre to the suburb village of Hillegersberg, which would eventually be swallowed up by Rotterdam in 1941. In Hillegersberg the Josiah Russell factory was housed in the outbuildings of an 18th century mansion named Oranjeoord. The mansion itself was not used by Josiah Russell & Co. but rented out.[7] There is ample proof that by this time the network of agents and distributors had expanded considerably. We know the names of companies in Schiedam (Fa. J.H.C. van Waart), Hilversum (Fa. A.C. Vlaanderen), Nijmegen (Fa. Th. Plet), Tilburg (Fa. Gebrs. Van der Loo) and Leeuwarden (Fa. J.W. Alberda) who were involved in the distributing of Josiah Russell soft drinks.[8] Soda water and ginger ale seem to have been the most important of these soft drinks. At the end of 1905 the partnership between Josiah Russell and Edward Marsh was dissolved by mutual consent. As a consequence the business at Hillegersberg was split off and was carried on solely by Marsh and his son, who maintained the right to trade under the company name Josiah Russell & Co.[9] At the end of his life Josiah Russell, who had no descendants and had been a very active member of some freemasonry lodges in London, returned to his native town Bexhill-on-Sea, where he lived at his brothers house and died in August 1911.[10]

Stationary of the soft drink factory in Hillegersberg, 1920s or 1930s.

In 1912 the Josiah Russell factory in Hillegersberg reintroduced a soft drink that had been part of its product range since the start under a new brand name: Club Tonic. At this time tonic waters were hardly known to Dutch consumers and were thus considered to be a specialty. Around this time the company also started cautioning pub owners and the public at large to be aware of imitations.[11] Apparently some competitors had started selling soft drinks in bottles with labels that looked exactly like the bottles and labels used by Josiah Russell & Co. It might be that because of this imitation James Henry Marsh decided to adopt stoneware bottles in order to maintain a certain distinctiveness. In the 1930s stoneware bottles were used by Josiah Russell & Co. for its grapefruit flavoured soft drink as well as for ginger beer; on invoices used by the company the word kruikjes (stoneware bottles) is only printed behind these two products and not behind any other product. Whereas grapefruit flavoured soft drinks were very much in demand in the 1930s, ginger beer was only a niche product. Because one Josiah Russell bottle has survived with a paper label for champagnepils, it can be assumed that stoneware bottles were occasionally filled with other soft drink flavours. None of the known stoneware bottles of Josiah Russell & Co. has printed underglaze transfers. Therefore all bottles must have been originally fitted with paper labels.[12]

After the German occupation of the Netherlands the Josiah Russell factory in Hillegersberg was let out or voluntarily handed over to a local competitor, N.V. Handelmaatschappij v/h J.C. Tims, whose factory had been destroyed in the German bombardment of Rotterdam (May 10, 1940).[13] By doing so James Henry Marsh avoided that the factory in Hillegersberg was being seized by the Germans as enemy property and subsequently being consigned to a German caretaker manager. After the war N.V. Handelmaatschappij v/h J.C. Tims officially took over the factory in Hillegersberg (1949). In the 1950s tonic water under the new brand name Royal Club became a very successful product of the Tims company.[14] In 1959 the Oranjeoord mansion was demolished and a new factory was built on its site. Ten years later N.V. Handelmaatschappij v/h J.C. Tims was taken over by Vrumona N.V., the large Heineken-owned soft drink plant in Bunnik. 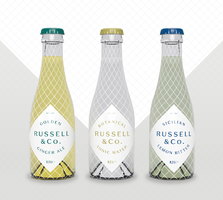 Picking up on the trend of upmarket tonic waters and mixers, Vrumona in 2016 launched a series of soft drink flavours under the new brand name Russell & Co., which clearly refers to Josiah Russell & Co.[15]